Shipping is a “pillar” for quality of life; Michigan benefits

Celebrating the success of the region’s economy was the main event as Great Lakes commissioners gathered in Indianapolis last week for their annual meeting.

Presentations by Great Lakes shipping interests painted a positive picture for the industry. A study presented by the Great Lakes Commission and a regional business group indicates the federal Great Lakes restoration program is having a positive economic impact on reviving legacy cities like Detroit and Muskegon.

The Commission is a U.S. and Canadian Compact that represents the region’s governors and premiers on environmental and economic issues.

Craig Middlebrook from the St. Lawrence Seaway Development Corporation presented results of a comprehensive economic study on shipping on the Great Lakes.

In an interview with Great Lakes Now, Middlebrook said “shipping is having a very good year and the trendline is positive.”

He said cargo tonnage is up 4 percent in 2018 and the “star performers are grain exports and steel products.” Middlebrook said to date the trade tensions between the U.S. and Canada haven’t impacted shipping on the U.S. side of the St. Lawrence Seaway.

Middlebrook is the Deputy Administrator of the Seaway Corporation which is part of the U.S. Department of Transportation. 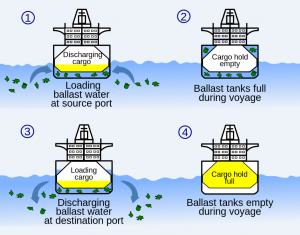 Ballast water discharges in the Great Lakes have been a primary vector for species like Quagga Mussels to enter the lakes causing ecological and economic harm.

The U.S. Fish and Wildlife Service estimates that it costs the region $200 million annually to control aquatic invaders that come from ballast water discharges.

Middlebrook defended the industry saying “there is no question that for the last ten years that the commitment by the shipping industry to fight aquatic invasive species has been strong.”

He cited the lack of uniform ballast water regulations in the region as an ongoing issue to be resolved and said “uniformity has to rule the day.”

The Alliance for the Great Lakes’ top policy executive Molly Flanagan did not respond to requests to comment on ballast water regulations.

Middlebrook told Great Lakes Now that “shipping on the Great Lakes is a key pillar to support quality of life in the Midwest and Michigan benefits from it as much as any state.”

Prior to the Great Lakes Commission meeting, the results of a study on the economic benefits of the federal Great Lakes Restoration Initiative (GLRI) were released saying it has produced a positive economic outcome for the region.

That’s separate from the ecological benefits of GLRI.

The report said “every federal dollar spent on (GLRI) projects from the program’s launch in 2010 through 2016 will produce $3.35 of additional economic activity in the Great Lakes region through 2036.”

The study was coordinated by the Great Lakes Commission and the Council of Great Lakes Industries. University of Michigan researchers conducted the work. 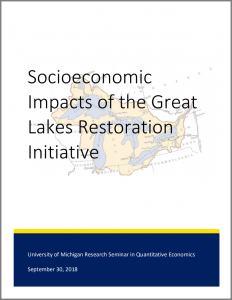 The report cited eight case studies to illustrate how the economic impact of the GLRI translated into local improvements in specific Great Lakes communities.

Detroit was a case study and the report referenced the Detroit River’s industrial past where  “steel mills, oil refineries, chemical manufacturers, and other plants discharged into the river.”

The report said “as a result, Detroit River water became contaminated with PCBs, mercury, metals, and bacteria” and the river was seen as a place not worth visiting by the public.

“But that’s changed in a major way since the implementation of $89 million worth of Great Lakes Restoration Initiative (GLRI) waterway cleanup projects, which followed decades of investment in water infrastructure,” the case study says.

Among the report’s stated economic benefits for Detroit are increased recreation opportunities, waterfront developments and an increase in millennial population even though overall population has declined since GLRI was implemented in 2010.

GLRI has been an “influencing factor” in bringing economic benefit to Detroit, the study says.

In spite of GLRI, the Detroit River is still years or possibly a decade away from getting rid of legacy toxins  that have long plagued the river. The U.S. Environmental Protection Agency estimates it will be 2025 or longer before cleanup work on the river may be completed.

In May, the EPA’s Tinka Hyde told Great Lakes Now progress in cleaning up the river is dependent on “getting everybody to work in the same direction.”

Richard Hobrla from Michigan’s Department of Environmental Quality said it will take public support to generate action on the river.

Lake Erie’s Western basin and Toledo were not part of the case studies.

The region has received approximately $75 million to combat algae since 2010 when GLRI started to fund projects, according to an EPA spokesperson.

The area has been beset by toxic algae blooms including one that caused the 2014 Toledo drinking water crisis that left 400,000 people without water for three days.

Algae blooms and their mere threat have hurt the tourism economy of Northwest Ohio and the charter fishing boat sector has been hard hit. Charter boat captains are reporting an approximate 7 percent decline in business in 2018 which follows previous declines.

Beth Wanamaker from the Great Lakes Commission said “the study did include spending in those areas. The economic effects that the research team estimated were averages over all the (GLRI) projects they considered.”

The EPA remains “firmly committed” to the use of GLRI funds to combat algae in Lake Erie’s Western Basin an agency spokesperson told Great Lakes Now.

Last week a federal judge in Toledo dismissed a lawsuit brought by Chicago’s Environmental Law and Policy Center (ELPC) against the U.S. EPA for not requiring Ohio to develop a limit known as a TMDL on how much nutrient pollution Lake Erie can take.

Commenting on the decision, lead ELPC Attorney Madeline Fleisher told Great Lakes Now, “It’s important to note that Judge Carr recognized that Ohio’s obligation to develop a TMDL for western Lake Erie is not optional.” She said the judge’s decision was more about the timing of requiring the TMDL.

“We’re evaluating next steps for getting Ohio and U.S. EPA to move past their current ineffective steps to address harmful algal blooms in western Lake Erie,” Fleisher said.

An EPA spokesperson said the agency does not comment on litigation.

Lake Erie is the only Great Lake officially listed in “poor and deteriorating condition.”

The economic impact study of Great Lakes restoration was reviewed by a panel of economists and other experts from outside the Great Lakes region, according to a press release.

Under a heading titled “Expert Panel Process,” the study said because of time constraints “the usual process for ensuring rigor in approach and methods – academic peer review – was not possible.”

The shipping economic impact study is linked here and the GLRI study is here.